Why I Love Rome

I have been a regular visitor to Rome since I fell in love with it as a Classical Archaeology student, when I spent the happiest two weeks of my life on an archaeological undergraduate summer school organised by the British School at Rome.  Though the primary aim of the trip had been educational, I soon discovered that there is a lot more to Rome than the academic study of the ancient ruins which had initially brought me there. 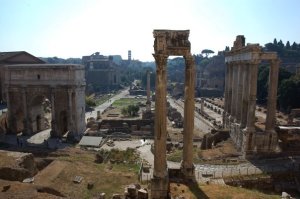 The Forum Romanum as viewed from the Tabularium

Undoubtedly, Rome’s majestic ruins form a large basis for its appeal.  Wandering amongst them, it is incredible to consider the fact that this city was once at the centre of a vast and highly sophisticated empire, with public and private buildings easily comparable with the most lavish of today’s palaces.

Indeed, our word “palace” comes from Rome’s Palatine Hill, the hill associated with Rome’s mythical founding by Romulus, upon which the emperors later built the opulent residences which now lie in ruins across much of the hill.

Today, among the most impressive and well-preserved of Rome’s surviving ancient monuments is the Pantheon, the enormous unsupported concrete dome of which, at around 2000 years old, was only equalled by modern architects in 1958:  a true testament to Roman engineering expertise.

The so-called “Eternal City” today is, as it has doubtless always been, the sort of place where there is a surprise around every corner and where one is continually aware of its long and vibrant history – something which neither written descriptions nor photographs can prepare one for.  The juxtaposition of ancient and modern is constant; I have experienced no other city where the chaos of daily life is played out on such a dramatic historical stage, where a Puccini opera would not be out of place as a soundtrack to one’s existence there.  Going out to a wine bar on a balmy summer evening, it’s impossible not to marvel at the fact that your gaze falls upon the same columns seen by the emperor Augustus and his successors; there is the rostra, or speaker’s platform, upon which the likes of Cicero delivered their speeches; and there, often glimpsed unexpectedly at the end of long, narrow backstreets, is Rome’s most famous monument, the Colosseum, the sheer scale of which takes my breath away every time I lay eyes upon it.  Coming from a country in which Roman ruins rarely constitute more than a few shallow walls in a field, the dizzying heights of the surviving ruins in Rome, and the fact that so much of the city is given over to them, take one continually by surprise.  Even Rome’s Stock Exchange is built into a sizeable ancient Roman temple, the mighty columns at the front of which dominate the surrounding piazza.

Sharing Rome’s surprises with family and friends is a joy in itself, and undoubtedly the most satisfying is introducing someone to the Trevi Fountain for the first time.

The fountain has been seen so often in such films as Audrey Hepburn’s Roman Holiday that one would have thought that this would somehow lessen its impact, but in actual fact this is impossible.  The sudden appearance of this romantic landmark after a short stroll through a series of narrow Roman streets evokes such surprise and delight in first-time visitors and Rome veterans alike that it’s easy to see why it is so famous.  The roaring waters of the fountain, supplied by an ancient Roman aqueduct from a source 20km away, combine with its breathtaking scale to overwhelm the small piazza in which it is situated.  No visit to Rome is complete without the obligatory ritual of tossing a coin over one’s shoulder into the waters of the Trevi, said to ensure good luck and your return to Rome.

While it’s debateable whether or not it’s the magic of the Trevi fountain that keeps me returning to Rome, I  have no doubt that I will continue to do so for many more years to come.  I’m never happier than when I’m in Rome:  I love the climate; the food and wine; the majestic Roman pine trees; the wonderfully cool, crystal clear drinking water which flows from the innumerable fountains which always seem to crop up when most needed; the bright green lizards which scuttle improbably quickly across the imposing Roman ruins; and I love getting lost in the maze of secluded backstreets, with their tall, ochre-coloured apartment buildings and forest green shutters.  It’s almost impossibly romantic, and when, inevitably, a stay in Rome must come to an end, it is with a heavy heart that I return to England.  But, as the great travel writer H.V. Morton once wrote, “One does not say goodbye to Rome.”  I know exactly what he meant.

I graduated from Oxford University in 2009 with an MA in Classical Archaeology and Ancient History from St John's College. After graduating I worked as a Geographic Researcher at Holidaylettings.co.uk, spending lots of time researching and writing travel guides to worldwide destinations, developing my copywriting skills. After working as a copywriter and content consultant at White.net (formerly SEOptimise), where I most enjoyed working with travel clients, I went self-employed. I now divide my time between freelance copywriting and running the business I set up with my boyfriend - AirExperiences.co.uk - selling aviation gift experiences. In my spare time I'm training for a Private Pilot's Licence, and I also enjoy travelling, wine and baking. My favourite authors are Charles Dickens, Gabriel Garcia Marquez and Bill Bryson.
View all posts by Rachel Ingram →
This entry was posted in Italian City, italy, Rome, travel, Travel guide and tagged Colosseum, Italian cities, Rome, Travel Italy. Bookmark the permalink.

1 Response to Why I Love Rome